A Diamond Ring and Burried Treasure

Here’s how it all happened….
Saturday night (October 8th) I was hanging out with some of my girlfriends and I got a phone call at around 11:30 from Jeremy. He asked me about my day and about my plans for the next day.  I told him I was going to church with Kristin at 10:30, Lunch with Marielle and Kjerstin at 12:30, Teaching Sunday school at 5 and babysitting at 6:45.
Jeremy said something along the lines of, “sounds like a busy day! I didn’t know you were going to see Mari and Kjerstin… that’ll be fun. By the way… I have a surprise for you tomorrow morning, get ready and I’ll pick you up at 8.”
In my mind I was thinking, I bet he’s taking me out for breakfast and has a coupon that can only be used between 8 and 10 or something. Over the next few hours I got a text from Mari saying she got tickets to the Vikings game and wanted to reschedule (Lie #1), then Kjerstin texted me saying that her mom wanted to do some planning for her wedding that afternoon so she couldn’t get together either (Lie #2). The next morning I got a text from Kristin saying- “sorry but I’m not going to make it to church this morning… maybe next week?” (Lie #3) Looking back, I should’ve known something was up but good thing I’m oblivious to all things and still had no clue.
Annika had slept over that night and asked why I was leaving so early and she said “I bet you’re gonna get engaged!” I quickly told her that it wasn’t going to happen since I thought it would happen over Thanksgiving.
He picked me up at 8:15 (because I was late :-/) and we started to drive. About 10 minutes into the drive I asked where we were going. He said it depended on what time I needed to be back and I told him I got ditched by all my friends so I didn’t need to be back until 3:30 to get ready for Sunday School. He said, “That’s actually perfect because I Googled places online that are the best for seeing leaves at this time of year and found that Stillwater and Duluth are the best (Lie #4) (I had been working on making an activity center for my First Graders and needed to collect a bunch of leaves and he said he would help me out). So since I had so much extra time he suggested we go to Duluth for a spontaneous trip. I was still clueless and just thought it was a fun idea. 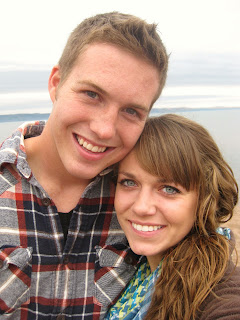 When we got there, we got soup from a deli and ate it at Park Point, a beach that his family ALWAYS goes to when they’re in Duluth (Lie #5). After eating, he said we should get started on our leaf hunt. As we walked along the beach toward the woods, he pointed out a log that was buried in the sand and had my initials on the end. What a funny coincidence! When we were on Choir tour in Ohio a few years ago, there was a tree with a heart and our initials carved into it so I thought it was just another coincidence. Next thing I knew, he was pulling the log out of the sand and it said “Will you marry me?” carved into the side of it. As he pulled a ring out of his pocket, he got down on one knee and asked me to marry him. To be completely honest, I have no clue what else he said but of course I said, “yes!” 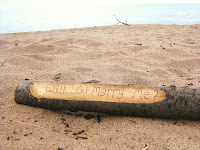 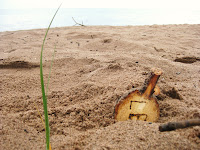 He told me that he called Kristin and told her to cancel on church, he got a substitute for Sunday school, called my nanny mom and Gretchen said she would babysit for me, and he scrambled to find Kjerstin and Mari’s numbers to tell them to cancel… no wonder they texted me so late! So we had the whole day to spend together and just enjoy our special day. We went for a walk along the shore, walked out to the light house, went to all the little shops, and went to eat at the rotating restaurant at the top of the Radisson. 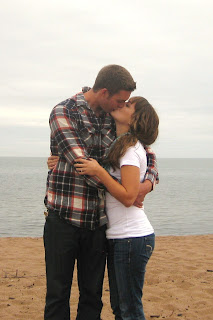 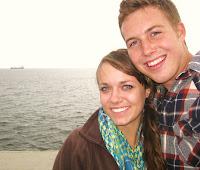 He kept insisting that we go back to the place he proposed so we could watch the sunset. When we got there, he said, “When I took out that log, I don’t think I dug deep enough… let’s dig deeper.” So we got down and dug in the sand until we hit a wooden chest. I recognized it right away… at Easter we were cleaning out my Grandma’s house since she’s in a nursing home now so my cousins and I were all claiming what we wanted to take. In the basement there was a really old chest with Norwegian writing on it that you could barely read anymore, the hinges were broken, the wood was rotting and my mom wanted to throw it away. Jeremy thought it was cool and said we should take it. Without me knowing it, he sanded, stained and varnished it and burned our names in the top and burned a big L on the front for Langness. Inside there was a white blanket, two champagne glasses, sparking grape juice and candles. So we spent our evening enjoying each other’s company, looking at the moon and listening to the waves. It was an absolutely perfect day and I couldn’t have asked for anything better. 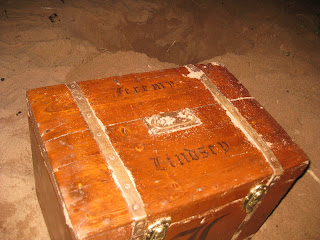 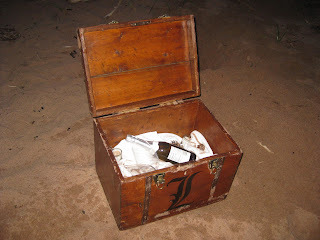 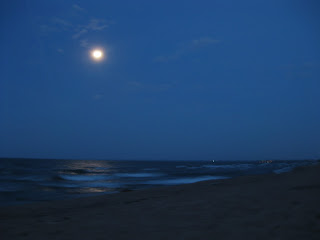 On the way home from Duluth, we had so many good laughs as we listened to the reactions of our families and close friends. I am so incredibly blessed. I can’t believe all of the time he put into that day (he and Jon even drove up there the night before to bury everything- thanks Jon!). This is only the beginning of this journey together and I’m so excited to confidently know that I will spend the rest of my life with him. I am one lucky girl.